Chronic disease becomes more prevalent as we age. Some of this is because of genetics, however, lifestyle seems to play a large role in our longevity. In this post today we will discuss why maintaining a healthy lifestyle is important. We will peek into the Blue Zones that Dan Buettner discovered as he traveled the world.

“If you ask what the single most important key to longevity is, I would have to say it is avoiding worry, stress, and tension. And if you didn’t ask me, I’d still have to say it.” George Burns

Dan Buettner set out on a bicycle trip from the Arctic Ocean to the southern tip of South America. Along the way, he found some of the healthiest people in the world.

He found extraordinary people, entire villages where the people were living to an extremely old age. That trip piqued his interest, and he had to find out why.

He and his colleagues began studying areas around the world, to identify populations of communities where people live much longer and healthier lives than the average human being.

When Buettner and his colleagues would find these areas, they drew a blue circle on the map around each one. Hence, the term ‘Blue Zone.’

In the November 2005 issue of the National Geographic magazine cover story, “The Secrets of a Long Life” John Buettner wrote his story.

Dan Buettner went on to write his book The Blue Zones Solution.

In it he described the five known Blue Zones which he found in various parts of the globe.

These are the few places in the world, where groups of people have low rates of chronic disease and live longer than people anywhere else.

Studies have shown that these areas contain large numbers of people who live to be over 90 and 100 years old. Buettner, felt as though diet and lifestyle play a huge role in determining lifespan.

In Okinawa, Japan the women live to be the oldest. They eat a lot of soy-based foods and practice tai chi, a meditative form of exercise. The Okinawans tend to follow the 80% rule. It is a Confucian adage which is intoned as a prayer. “Hara hachi bu” reminds them to stop eating when they feel 80% full.

#2 The Mountain Regions of Sardinia, Italy

The mountainous region of Sardinia, Italy is home to some of the oldest men in the world. A substantial proportion of men reach 100 years old. They typically work on farms raising animals. Living on steep slopes in mountainous regions, they walk long distances. They are known to consume a lot of red wine.

The Nicoyan diet in the Nicoya Peninsula of Costa Rica is based around beans and corn tortillas. These people of this area perform physical jobs on a regular basis, well into old age. This gives them a sense of purpose in life known as “plan de vida.”

Icaria, Greece is an island where people eat a Mediterranean diet rich in olive oil, red wine and homegrown vegetables. Icarians are typically Greek Orthodox Christians, a religious group that has many periods of fasting for religious holidays throughout the year. Fasting can lower blood cholesterol and lower body mass index (BMI). They have the highest percentage of 90-year-olds with almost no dementia.

Check out this Prime Video on the people of Icaria and their lifestyle.

The Seventh-day Adventists in Loma Linda, California, USA, are a very religious group of people who are strictly vegetarians. They live in tight-knit communities and are very active in their warm California climate. They are the longest living people in North America.

People who live in Blue Zones eat a diet with plenty of whole plant foods. Peas, chickpeas and beans: fava, black, soy and lentils are the cornerstone of most centenarian diets.

95% of their diet is plant based which are all rich in fiber and protein.

They eat small portions of animal-based food products much less frequently than many in the other parts of the world seem to do.

Their smallest meal is eaten in the late afternoon or early evening.

There is a great source of fiber, vitamins and minerals in the consumption of fresh fruits and vegetables. This is thought to significantly reduce risk of heart disease and cancer.

Whole grains, also a part of much of the diets in these areas, are also rich in fiber.

Nuts are a great source of fiber, protein and healthy fats. The people of Loma Linda, California, consume nuts in their diet.

Fish, which is often associated with heart and brain health, is often eaten in Icaria and Sardinia. Fish is a good source of omega-3 fatty acids.

Exercise is part of daily life. It is also an extremely important factor to help one’s body stay young. Built into their daily lives are gardening, walking.

Dan Buettner noticed that the world’s longest living people don’t lift weights, they live in an environment where they need to keep moving without thinking about it.

They don’t have mechanical conveniences in their homes and gardens, and they enjoy what they do. They have a purpose for waking up in the morning. Having this sense of purpose is worth up to 7 years of extra living.

Buettner found that people in the Blue Zones have a routine to de-stress. Okinawans take a few moments each day to remember their ancestors. Seventh-day Adventists pray, Ikarians take a nap and Sardinians do happy hour.

Another typical habit in the Blue Zones is that people usually have a normal Body Mass Index BMI.

Moderate alcohol consumption is another dietary factor common to the Blue Zone communities. They will drink alcohol moderately or not at all.

In the Blue Zone communities, such as Icaria and Sardinia, it is also common to have daytime naps. They sleep when their body tells them to. In many Mediterranean countries, they have 30-minute daytime naps known as “siestas.”

Aside from diet, exercise, and rest, Blue Zones are typically religious communities. Most centenarians belonged to some faith-based community.

Religion, purpose in life, family and social networks are very important. This may encourage longevity due to the support and reduced depression rates.

Research shows that strong social connections have a long-term impact on your health and happiness.

In many Blue Zones, the different generations all live in the same house. Grandparents look after the grandchildren. That helps the older 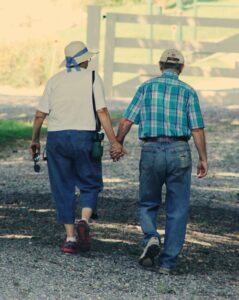 ones to maintain a purpose in life. This is known as “ikigai” in Okinawa or “plan de vide” in Nicoya.

Successful centenarians in the blue zones put their families first. This means keeping aging parents and grandparents nearby. This lowers the disease and mortality rates of children in the home, as well.

Committing to a life partner is also a social connection and can add to your life expectancy. Investing time and care in your children means they will more than likely care for you when you need them.

Traditionally in Okinawa, Japan, your “moai” is your social support. At an early age, about 5 young children are paired together and they become friends for life. They gather together for work and play and pool resources.

The moai have deep respect and support for one another. If someone gets sick, a spouse dies, or they run out of money, they have each other as a safety net.

We can understand how a moai, a group of lifelong friends that begins in childhood and extends through old age, can be invaluable to bring happiness and reduce the stresses of daily life.

In Buettner’s book, he provides a list of nine lessons, covering the lifestyle of blue zones people.

Those who are physically and socially active, share similar values, healthy habits, and lifelong goals, are less likely to experience stress and loneliness.

We need to know why maintaining a healthy lifestyle is important. By observing Buettner’s 9 principles, and living in a simple, healthy way,  we see that these seniors do not just survive, but they thrive.

Please leave a comment below and tell me what living a healthy lifestyle means to you!

As an Amazon Associate I earn from qualifying purchases.

Posts may contain affiliate links. If you click on and purchase through one of those links, you won’t pay a penny more, but we’ll get a small commission, which helps keep our website operating. Thanks!